There are 2 photo versions of the ring circulating on the internet. It has been impossible so far to confirm which one is authentic. Here are the photos. 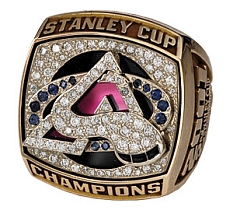 Here is a photo of another ring. According to my research, this ring was given to a member of the front office staff and it would make this an unofficial championship ring.

This site uses Akismet to reduce spam. Learn how your comment data is processed.